www.youtube.com links are there for a point of reference if you don’t know what I’m talking about.

Do you have a question about stage 4 brain cancer?  Ask if you do!

300 Squats while balancing on my toes.

I exercised to “Alter Bridge” the album “Fortress”

Nothing wrong with this place, selling a condo suite in Regina is all but impossible right now.  We’d like to move just for the reason that we are just very isolated here.  Nothing against anybody here but, were around 20-25 years younger.  Truth be told we moved here out of necessity after living with my parents for 2 ½ months.  This place was still being built.  Our old house was REALLY not wheelchair accessible.  This place was basically custom built for my wheelchair.  3 foot wide doors, big open concept, special made spot off of the island for me to have a meal, walk-in en suite shower, large main bathroom, etc.  Biggest issue for me is an 8’ X 5’ balcony with no shade that I have to crawl onto or walk out onto with Kim’s help.  The lip at the bottom of the door frame is too tall for my wheelchair to roll over.  I’ve been out of our suite once in 2 weeks.

I didn’t realize it on Tuesday, but I’d like to move too.  EVERYTHING was brand new here as of 2013.  We even bought better appliances than they offered us.  Surround sound is already built in with the rear speakers flush to the roof.  Fact is condos aren’t selling in Regina since building companies continue to build 100s of cookie cutter cheap condos in new areas for around $170,000 and most of them are vacant.  I don’t know if it’s because of our place not selling or what it is but the wind disappeared from my sail Wednesday afternoon, & as of Thursday afternoon it’s not back yet.

Everything before this was prewritten.  No clue right now as to what our decision will be on the condo sale.  We talked with our realtor Tuesday evening & he left the decision completely in our hands.  He had a list of condos in the city that haven’t sold.  After hearing that we decided to leave everything as is.  Contract ends at the end of the month & we really can’t lower the price.  So all of that & the added fact that there isn’t much, if anything, out there for us.  All of this said we had a viewing last week, one Thursday evening & as we got home Kim got a text from our realtor about another this afternoon.  Kim & I need to chat & hear whatever feedback will come to make our decision.  We already agree that we can’t afford to lower the asking price.

Kim was EXHAUSTED Tuesday evening from some overtime, so practicing the stairs didn’t happen.  Wednesday it just never popped into our minds & Thursday I was lazy & did nothing.  Then I had to get out of here for the house viewing.  That explains the low exercise total for the week.

I can’t sell a guitar EVER!  I’ve got them for many reasons other than each one sounds different.  Each one feels different & makes me want to play a different way.  The biggest difference is between my Explorer from 2002 and my 7 string Les Paul from Kim this year with the exact same pickups.  Body style makes a MUCH bigger difference in the sound than I ever thought.

If I was starting to learn guitar today, I’d likely buy something VERY cheap.  No wonder it’s all over the internet that guitar driven music is dead, over $1000 for an “inexpensive” guitar, a PRS SE (SE stands for Student Edition) what kind of “student” has $1300 to spend on one guitar???????  That alone would turn me off!  PRS offers their private stock which you can make a guitar whatever price you like over $1300, their Core line which is around $4000, CE line which are bolt on necks, S2 line was introduced in the mid-90s for a mid-price range, then the SE line with less finish/colour selection at their lowest price of $1300 since that line is made in Korea with cheaper labour, parts, & thinner layers of expensive wood.

I ordered an S2.  Made at the factory in Maryland, same thickness of wood as the Core line, more colour options than the SE line (which only came in a dark charcoal & I already own 3 black guitars including my acoustic), originally the switch on the SE didn’t look convenient but has changed for the 2020 line, & cheaper parts from the Korean factory which are modeled after the parts made at the American factory.  I paid more, but an SE “Paul’s guitar” has different pickups, bridge, & twice the amount of pickup combinations on the guitar electronics.  Mine will be AWESOME anyways.  I’m assuming the Coronavirus will delay the shipment of my guitar (again) from late August until who knows when.  Oh well, nothing anyone can do about that.

I promise there will be no talk of another guitar.  I did the math and what I’d have to sell to pay for it, is not worth it!  I’d either have to sell my brand new 7 string & a few $100 out of pocket or all of the other 3 guitars.  Neither one of those scenarios would EVER happen.  I’m more than happy with what I already have & will have!  Instead I have named my electric guitars, even the one yet to be made.  I’ll show you a nice photo of just a guitar with its name on the next few posts, one electric at a time.  When I get my late August arrival, we’ll see it for the first time together & I’ll let you know its name then!

Kim tells me that naming my guitars is stupid?  She named our fresh water fish, by the way NKOTB are dead….no really, we had them & they died.  Every vehicle we’ve had has had a name?  How are guitars any different?  She told me to name our red 2019 Toyota RAV 4, she didn’t like ‘The Flash’ so my 2nd and final choice was “The Streak” it’s either something you don’t want to see in your underpants or you can sing the song?

Anyways this is “Kermit” because it’s green.  I was tinkering with the idea of calling it “Forever 21” since that was my 21st birthday gift but I had to stick with “Kermit”.  I demanded a lot from that guitar, so it wasn’t easy being green! 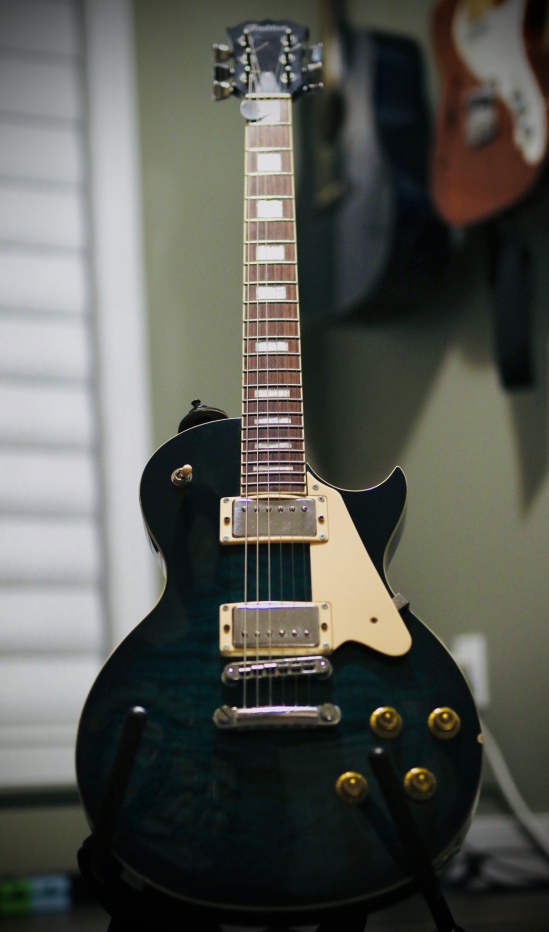 There’s a good chance you won’t see me playing a guitar on here.  Social media can be terrible, especially if you look different, such as having an iPatch.  I’ve got enough anxiety issues now as it is.

When I picked up my guitar again late last year, I went down a worm hole learning stuff I didn’t know before.  Like 5 different minor & major scales, bits of how to solo & shred superfast, arpeggio sweeps, etc.  Then I just stopped, since I wasn’t gaining any ground.  I thought to myself for a minute “Wait…I never played this kind of stuff before, I’m a rhythm player.  I should go back, learn my chords & riffs/hooks.  That’s where I live, that’s my area, I’m not a lead guitarist” I did just that on Tuesday & WOW, I really gained a LOT by scaling things back.  I learned what I should & about 5 new to me songs and have been practicing them this week.  Chords & riffs, back to what I’m good at but mostly newer songs.  I’ll keep practicing & speeding up a few of the scales, but this feels normal to me, playing more recognizable parts of a song.  About 4 Led Zeppelin tunes, a Foo Fighters tune I’ve never attempted, an Alter Bridge tune, an Ozzy Osbourne classic, & some older stuff I used to play.  Most of this from memory or by ear unless I get stuck, then it’s “HELLO INTERWEB!”

I will say that “Haley Williams’” 5 song EP ‘Petals for Armor’ is absolutely FANTASTIC!  Only problem for me is it’s too short, I want more!

If you’re getting this through Facebook, give it a like or other reaction, or share it.  That’s the only way of promoting this site, since I’m not profiting from this in any way.

“I feel good about the good things, & bad about the bad things”-David Grohl

“Be kind to one another”-Ellen Degeneres

This site uses Akismet to reduce spam. Learn how your comment data is processed.